Almost Natural’ is a sculptural multimedia installation based upon the idea of ’natural’ and ‘unnatural' as contradicting terms and is built upon the notion that these aspects no longer exist as separated concepts within today’s reality. Yet they are not perceived or visibly perceivable as such. The work reflects on the process of (artistic) creation, touching the field of identification, interpretation and valuation. 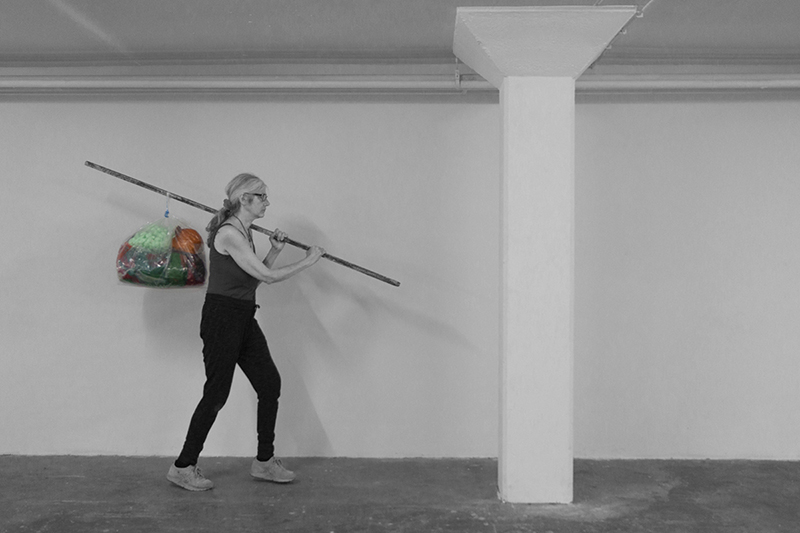 Throughout history nature has been given the status that god(s) had before and at the same time god is now represented through nature. The landscape has been used for centuries to express this and to ask questions about our place in it. People first felt overwhelmed by the greatness of nature and eventually developed a rather romantic sense towards the natural space. At the same time mankind began to exert influence on that same nature by exploring nature sciences. As science turned away from this experience a counter movement arose: The desire to be one with nature, which was advocated through art.

Thus, the human relationship to its natural environment came under tension quite a while ago. In the meantime, human influence on nature kept expanding in a way that artificial material and natural world became literally mixed. Not only in a literal sense, think of plastic particles in every living thing and even minerals, but also in terms of perception regarding nature. City dwellers can feel less and less at one with nature and a sense of powerlessness has arisen around our individual influence on social economic structures in relation to nature. 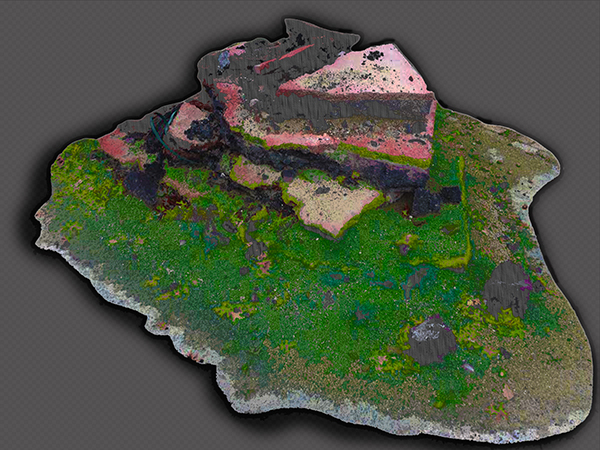 Small biotopes growing in the midst of unnatural suburban areas are not easily perceived as valuable for the environment. They are rather perceived as untidy, dirty, taking up space, un-economic and even dangerous. Natural growth is no longer tolerated in urban areas. 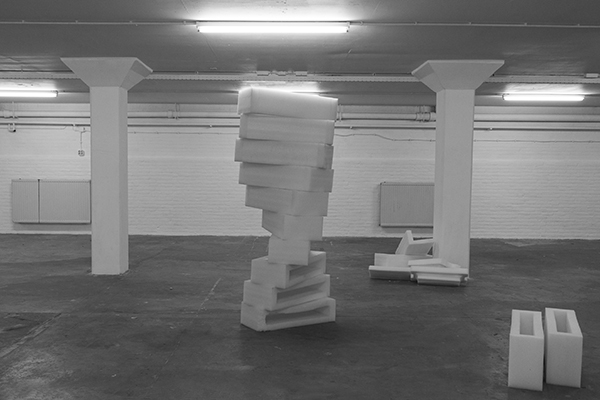 And because of the prevailing consumer society, a large amount of products that are not in accordance with our natural environment are brought into the world. Not only long-lasting products but large quantities of products that do not serve as an end product, like packaging material. Under the motto of well-being, progress and economy, mankind produces enormous numbers of harmful by-products for a low price which are thrown away with the greatest of ease and thus end up in nature. The big difference with visible street waste is of course that consumers, or end users if you like, are not directly confronted in their life space. Because the material often ends up in nature, polluting far away places of the world. People do know about it, but it is precisely this invisibility and the seemingly clean immediate surrounding, that causes not to feel responsible which is harmful for the cause of keeping our world liveable. 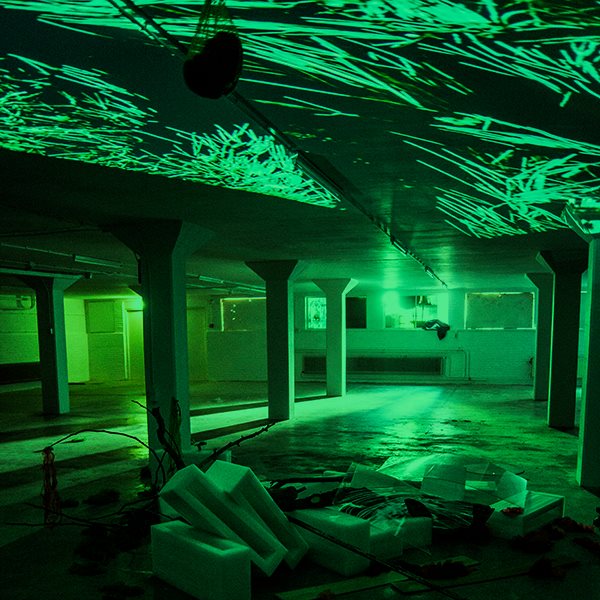 It’s a wishful fantasy of maintaining innocence and the idea of inevitability with which we fool our minds. Aesthetics play a major role in this because people are quickly satisfied: In an appealing or comforting setting, we do not easily experience something as threatening or unethical. This makes it easy to turn away from reality and responsibility. With installation 'Almost Natural' I touch these subjects.

One part of the video installation consists of a natural stream in which the leaves of the vegetation around and in the water are carried by the stream, creating satisfying natural green movements, attracting attention and providing a kind of hypnotic state. This is what we (still) know about nature, its healing power which makes us happier, gives us peace and good feeling while experiencing nature in a recreative way. But what happens when unnatural processes appear to us in apparently the same way? What are the consequences if we cannot see the harm we are bringing upon our environment? What are the consequences of such self misleading strategies regarding our understanding and relationship to the world?

To draw attention to the matter and generate awareness, I worked out a concept to implement exactly such a misguiding strategy within the art installation. By using digital media and images derived from nature and combining the two components into a one event, I built in the same kind of ambivalence. 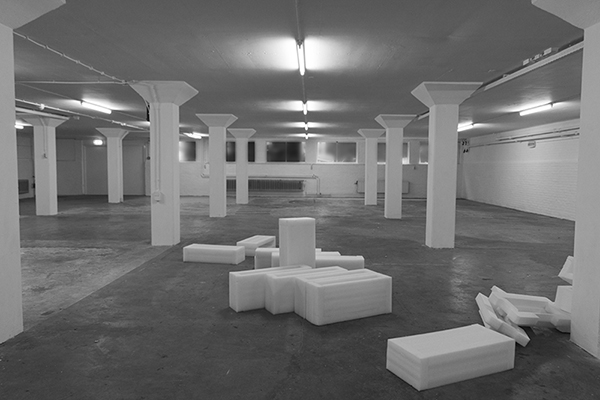 As basic material I used a number of large white foam plastic parts in which windows had been transported. I found them among all kinds of other construction waste in a dumpster. The material itself represents in its form and material the enormous excess of the construction industry. Due to the whiteness it lends itself not only very well for projecting, but the white also comes across as harmless. The elements obtained their place by fallen after being stacked, during a (video) performance. In fact, the whole setup can be seen as a series of performative actions to create a situation which sets the concept in motion. The installation is a residue of these actions, to be experienced in various ways.

On top of the foam blocks, randomly placed clear acrylic window plates catch and reflect the video projected on the ceiling, while the underlaying material is still visible. This creates several layers, like revealed in three-dimensional reality and reminds of landscape paintings. In between, around and on top, cut-off branches and tree trunks. Finally red and green plastic packaging nets from the fruit industry, that I collected over the years, were blown around the sculptural setting with a leaf blower, as if in a natural composition. Here and there round shaped mirrors in all sizes, appearing as corridors providing an illusion of further exploration or other worlds, but in fact eye catchers to become even more taken in by illusion. 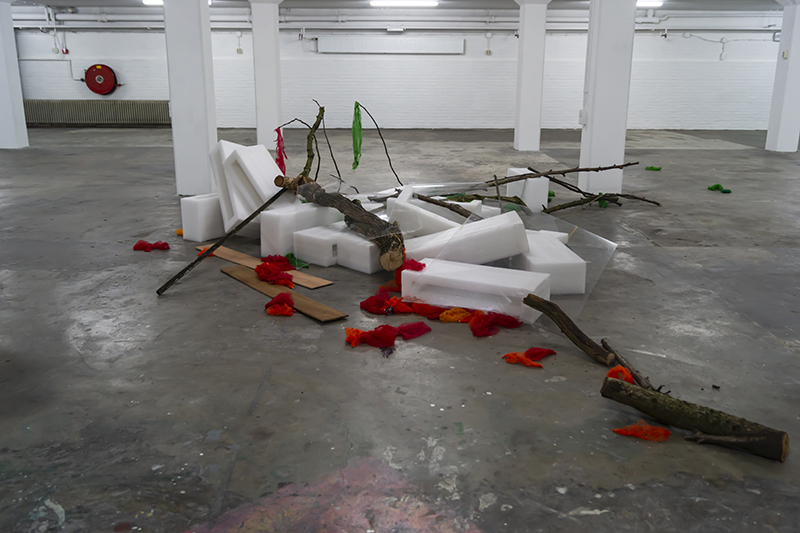 My intention was to create a situation that raises questions and creates awareness reflecting on the principle explained before. The ultimate achievement would have been, if the work was to have become part of an art collection. That way not only the art work but also the material would get a worthwhile place in the world. 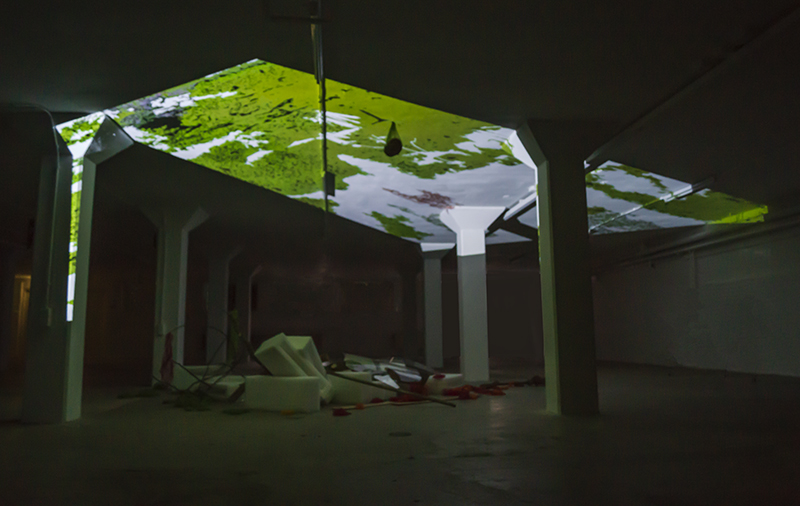 Within the site specific context ‘Almost Natural’ interacts with its location and historical background for it used to be a factory, before artists squatted it in the 70's and created a renown art space: A space as a place for action.

Presentation took place in July 2018, after a short experimental work period at 'De Fabriek' in Eindhoven.

Presented documentation includes various stages of the process leading up to the installation.

Related installation: 'Sand' (click image above ^ to go there)