The books were created and printed during an artist residency at the Chinese European Art Center: 40 books, 40 different titles, given by 40 different people.

As I took the photograph, the man who had placed the set, rushed over from the other side of the street and invited me to drink tea with him. It turned out to be the owner of a bicycle repair shop. I carried a letter translated into Chinese, asking people to come up with a title they would like. As he wrote down a title of impressive length, I was very curious about what it would mean. Later, when it was translated to me, it turned out to be the address of his shop. 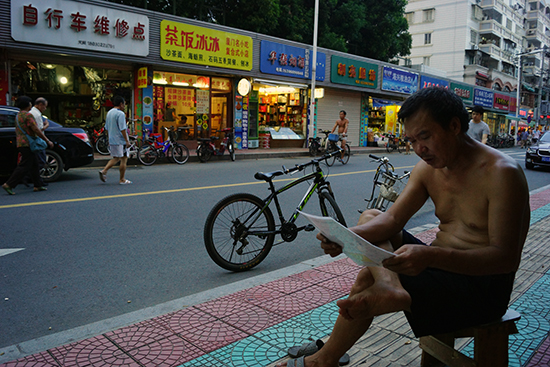 As I sat there with him for a while, I found out that lot's of people know him and greet as they pass by. The day I got the books from the printer, I visited him again. Having the freshly printed books with me, I showed him the book with his 'title' written on it. He laughed, pointing at his shop: a garage across the street. He was obviously pleased. Then he hurried back, because a customer arrived. I sat there with his wife for a while, using my iPhone to translate. She couldn't read I guess, for a younger man, also sitting with us, interpreted. She looked in the book. Special interest went out to the photographs taken nearby, pointing out that she recognized the places.

We said goodbye in a friendly way, and no differences of any kind mattered.